Located close to River Neelum, the town of Aarang Kel is a beautiful reminder of why Kashmir is referred to as heaven on earth 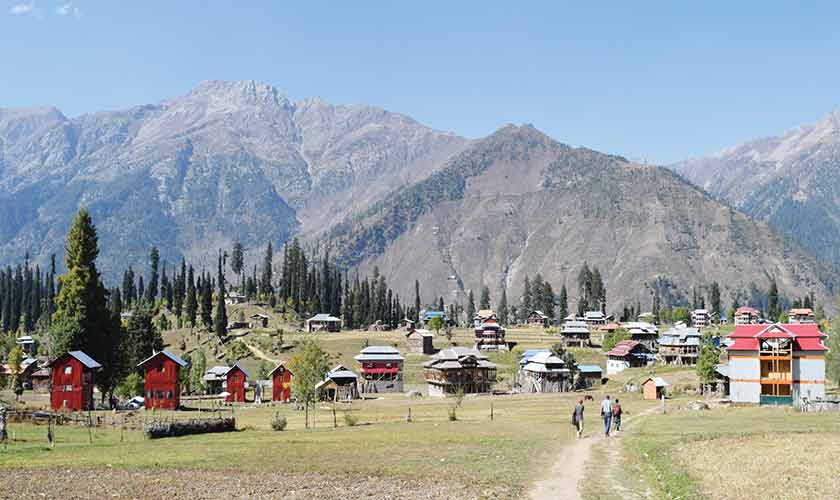 Having heard about the beautiful Aarang Kel numerous times from friends, it was on my bucket list for a long time. So October last year, I and two of my friends found ourselves en route to Kel from Muzaffarabad. It took us around eight hours to reach Kel after an exploratory lunch break at the Shardah and a few other short stops along the Neelum River. The drive was beautiful but the road was not. We had the blue waters of Neelum River continuously flowing alongside us and most of the valley was forested with tall green pines. Though the tourism facilities are still limited, one can clearly see why Kashmir is referred to as heaven on earth.

We stayed at Kel for the night, which is one of the last big towns in the upper Neelum Valley. The road continues for another three hours and ends at Taobut near Pakistan’s disputed border with India. Close to Taobut, the Kishan Ganga River enters Pakistan and its name changes to Neelum River. At Kel, we had some amazing freshwater trout dinner before we went to sleep. We were ready to head for Aarang Kel early in the morning.

We drove for five minutes towards the Neelum River which was at a few hundred meters drop from where we had parked our jeep. When it was time to cross the river we found out that a locally made but reasonably maintained cable car would take us across the river to the Aarang Kel side of the deep gorge. There was only one car or cabin to take people across and bring them back. As it was early October and off-season, there was no rush and we were on the cable car in no time. Frankly, the ride was breathtaking with cold winds blowing in our face as well as somewhat hair raising and we kept saying our prayers constantly. However, the beautiful scenery with Neelum River below and thick green jungle all around clearly was worth the adventure.

Sitting in the cable car, we could see the beautifully forested mountain wall in front of us. Our guide told us that Aarang Kel meadows are on the top of this nearly vertical mountain wall. We landed into a thick jungle on the other side of the river. It was time for the thirty-or-so minutes’ steep hike to the top. The hike was on a well-trodden but narrow path and we were soon panting for breath. We were sweating even though it was cold with almost no sunlight reaching us through the thick jungle. It was heartening to see many other tourists even at this time of the season. A good proportion were families from Karachi. 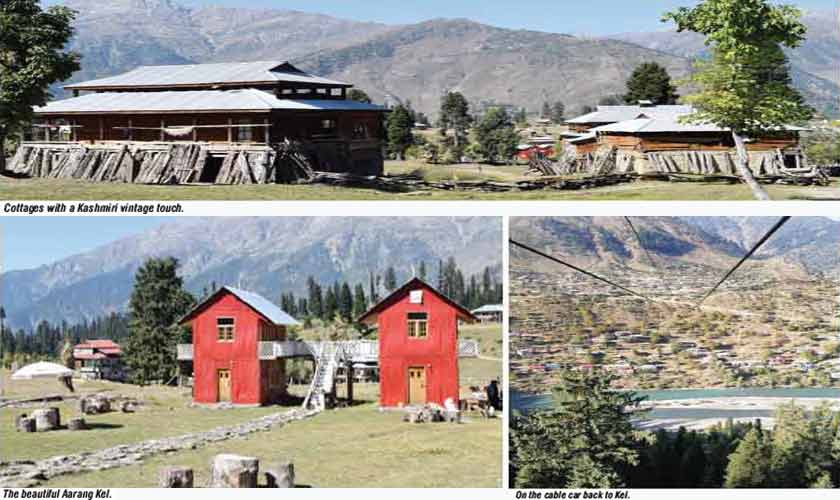 After puffing, panting and resting a few times, we finally saw the landscape opening up into a plateau and soon entered the expansive Aarang Kel meadows. We were lucky to find a gracious fellow on the route who was staying at the Army hut at one of the vantage points in the meadows. So we took some rest and after having tea and some nice pakoras, it was time to explore the vale. A part of the meadows is occupied by typical Kashmiri houses and some modern Swiss cottages while the larger part is still farms, water streams and forests.

It was, of course, a treat to find two Mercedes Benz trucks and a tractor at the meadows. I could not help wonder that if the only way to the meadows is through the steep hiking trail, how were these beasts transported to the meadows? Locals informed me that these vehicles are the collective property of the village and were brought from time to time in parts, getting re-assembled on reaching the meadows. One of the trucks having served the community for decades now stands quietly in the middle of the meadows watching the village turn into a bustling tourist spot over years.

After strolling through the village for some time, we crossed a nullah towards the jungle and meadows at the base of the mountains overlooking Aarang Kel. Besides pines, we could see walnut trees and potato and other farms. There were meadows all around and the pine jungles from meadows to the mountain top varied from golden yellow to light green to green. We walked for a couple of kilometres from the village into the jungle at the base of the mountains and it gave us a lovely view of the colourful Aarang Kel village.

We stayed at Kel for the night, which is one of the last big towns in the upper Neelum Valley. The road continues for another three hours and ends at Taobut near Pakistan’s disputed border with India. Close to Taobut, the Kishan Ganga river enters Pakistan and its name changes to Neelum river.

We sat in the jungle for some time listening to our guide who would conveniently bring in the topic of how close the Indian border was and the chances of our being captured by Indians whenever we asked him to explore a bit further into the jungle. The view from the jungle at the base of the mountains was beautiful. We had golden yellow trees between us and the village which looked beautiful with bright and colourful rooftops. Behind the village we could see mountains soaring up into the skies with peaks covered with snow and all of this was under a clear blue sky. Aarang Kel is indeed a picture-perfect postcard village. 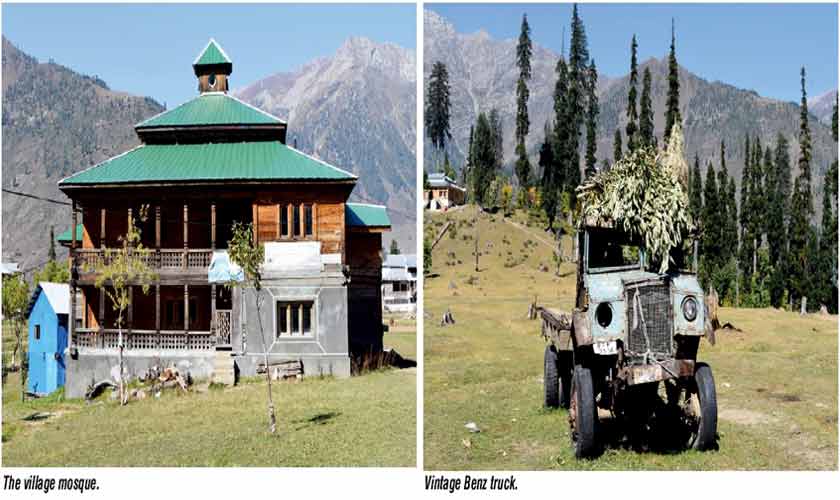 After having another nice cup of tea at the army hut, we took a parting look at this heaven on earth and left for the hiking trail. Despite what you may think, while ascending a mountain hill takes a toll on your lungs, steep descent is equally unpleasant for your knees. We reached the cable car in twenty minutes and after waiting for some time, we were again on board the cable car on our way back to Kel.

Besides the army huts, there are a few second-tier hotels in Aarang Kel. However there is definitely a need to develop better boutique hotels in Aarang Kel along with strict regulations for tourists. It is still beautiful and it appears that people of Aarang Kel, as well as the government, are conscious to keep the village clean. However a more deliberate effort to make Aarang Kel the next sustainable tourist destination is needed. Similarly, it would be good if the government can replace the current locally assembled cable car with a proper cable car system both to avoid the rush in summers and also to ensure safety. Aarang Kel is definitely recommended for an overnight stay to imbibe the true spirit of this heaven on earth as the sunrise and evenings at the village are scenic beyond any description.

The writer is a development professional with an interest in travel and heritage. He blogs at www.countryroads.pk and can be contacted at omarmukhtar16@gmail.com.